By: Home Generosity
In: Kitchen
With: 0 Comments

We can’t keep track of how many of our friends and coworkers have told us that we need an Instant Pot for our kitchen.

Multi-cookers have arrived and they are here to stay.

While there are now many multi-cooker options, Instant Pot is the brand that kicked everything off and has consistently been held as the best multi-cooker on the market.

Is it worth the hype though? And which Instant Pot model is right for you?

What Is An Instant Pot?

Instant Pots are all the rage, but not everyone knows what they are.

The Instant Pot may look like a pressure cooker, but it is so much more. Not only can it pressure cook, but it can also saute, slow cook, and make yogurt, just to name a few of its abilities.

Depending on the model, Instant Pot offers up to 11 different functions all in 1 unit.

Essentially, the Instant Pot is the Swiss Army Knife of small kitchen appliances. One pot and you have almost every cooking method covered.

Also, you may be surprised to find out that there isn’t just one Instant Pot.

Instant Pot is actually the brand name. While they make other appliances like blenders, their focus is on the 9 different multi-cooker models they make.

Which Model To Choose?

It can be overwhelming to look over the list of Instant Pot models.

To make things simpler, the Instant Pot multi-cookers are broken down into 4 series (from least expensive to most expensive): 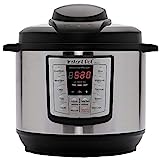 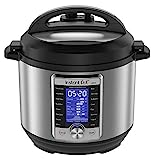 The Lux models are the entry level Instant Pots.

While they are available in the same sizes as the other models (3, 6, and 8 quarts), they are limited in their features.

The Lux Instant Pot can act as a:

They also only offer 12 preset cooking programs and can keep food warm for up to 10 hours.

Why You Should Consider The Lux

The Lux Instant Pots are perfect if you don’t need all of the extra frills of the higher end, costlier models.

For an affordable price you can get an Instant Pot that does everything that made consumers fall in love with Instant Pot in the first place.

Duo and Duo Plus Series

The Duo and Duo Plus models take the Instant Pot to the next level by adding in several handy features.

The Duo adds two additional cooking programs while the Duo Plus is programmed with 15 different cooking programs and a 6 hour pressure cook time. They both also offer yogurt making capabilities, a feature not found in the Lux.

Why You Should Consider The Duo

The Duo is Instant Pot’s best selling model for a reason.

Considered a mid-range option, the Duo strikes a fine balance between affordability and features. Throw in users’ praise for its durability and you have a crowd favorite.

Do you plan on using your Instant Pot for everything? Or do you need the best for your kitchen?

If that’s not enough, it offers 16 different pre-programmed cook settings, as well as an upgraded screen and stainless steel control dial.

Why You Should Consider The Ultra

The Ultra takes everything and turns it to 11. We’ve yet to meet anyone that has used all 10 functions but it is nice to know that they are there.

The real selling point on the Ultra series though is its look and feel. It screams quality, and has the features to back it up.

From our prior comparison of the Instant Pot to the Aroma Rice Cooker, we’ve heard from several of our readers as to their thoughts on the Instant Pot.

For this article, we’ve also reached out to Instant Pot buyers on social media and various forums for their thoughts.

“I’m kind of obsessed with the Instant Pot. I bought the 8 quart model and it very quickly found a permanent spot on my kitchen counter. The biggest thing for me was finding Instant Pot specific recipes. It just makes dinners so easy.”

“Pressure cookers always kinda scared me…can’t they blow up? But the instant pot won me over. It has already replaced my slow cooker.”

“A+ Instant Pot is where it’s at. You should definitely write a review on it.”

“After researching several cookers, I bought this to cook rice. It takes about 12 minutes to cook and is perfect with the push of a button. I haven’t messed around too much with its other features but it was a good purchase for the money.”

Final Verdict: You Should Buy An Instant Pot

You should BUY an Instant Pot!

Does it live up to the hype?

If you are interested in learning how each of its features work and are willing to put the time in to make them work with your daily cooking, the Instant Pot is the Swiss Army Knife of kitchen appliances that just can’t be beat.

However, even if you aren’t interested in using all of its features, it is still super handy, and excels at the basics such as pressure cooking and slow cooking.

With various models and price points available, there is an Instant Pot almost for everyone.

Welcome to HomeGenerosity, a home how-to and product review blog.  As an Amazon Associate I earn from qualifying purchases. See our privacy policy for more details.

Outdoor Security Lights: A Guide to Increase the Safety of Your Home

Modern Patio Furniture Materials Guide – How to Choose the Best

Basement Heater Solutions That Kill the Chill – 5 Options to Consider

Picking Up the Best Cold Press Juicer: The Ultimate Guide

Join Us For Ideas & Savings!

HomeGenerosity.com is a participant in the Amazon Services LLC Associates Program, an affiliate advertising program designed to provide a means for sites to earn advertising fees by advertising and linking to amazon.com. HomeGenerosity is paid a small fee by Amazon at no cost to you.

“There’s nothing half so pleasant as coming home again.”