By: Home Generosity
In: Kitchen
With: 0 Comments

Did you buy a pressure cooker yet?

We lost track of how many times our co-workers and friends asked if we tried cooking with a pressure cooker.

Finally, we caved and started to do a little research.

One name that kept popping up: Cosori.

We had seen the Cosori brand while shopping for other kitchen appliances, but how does the Cosori lineup of pressure cookers stack up to the competition?

We did our own investigation, and asked our readers for their impressions, to bring you our Cosori pressure cooker review.

What is a Pressure Cooker?

The trapped steam works to increase the pressure within the sealed pot.

High pressure raises the boiling point of water from 212 to 250 degrees, allowing your food to be cooked at a temperature otherwise unobtainable in boiling water.

The high pressure also helps to pump moisture and liquid into your food quicker.

Although this cooking concept has been around since the 17th century, pressure cookers have seen a significant uptick in popularity within the last several years.

What Can Pressure Cookers Cook?

Vegetables and beans are two of the most popular pressure cooked foods.

While it’s above our skill level, there are some people that even use a pressure cooker to make cakes! We haven’t been that adventurous though and have stuck to the basics like stews and rice.

We were optimistic going in since Cosori products are consistently found in online bestselling kitchen appliance lists. We even previously reviewed (and loved) their air fryer.

It was a nice surprise to find that Cosori offers 4 pressure cooker models: 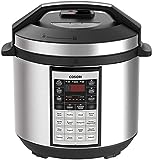 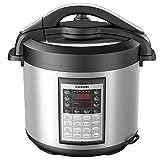 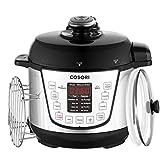 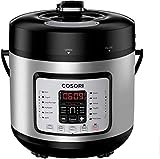 All of the big appliance brands seem to make pressure cookers now.

How does Cosori do?

When it comes to capacity, Cosori makes a size for just about everyone, offering three capacity options:

For most families, the 6 quart options are the perfect size. However, if you have a large family, or plan on using your pressure cooker for parties, you may want to spend the extra money on the 8 quart model.

Individuals, or couples with moderate appetites, may want to opt for the 2.1 quart option.

To give you a better idea on size, 6 quarts is large enough to cook up to 5 pounds of chicken!

Surprisingly, the 8 quart model comes in at a mere 9 pounds.

Counter space can be hard to come by so it’s nice to know though that none of the Cosori pressure cookers weigh too much to lift and put in the cupboard above the fridge.

If you’re looking for multi-functionality, the Cosori 8-in-1 is the gold standard.

According to one of our readers, the 8-in-1 “allowed me to ditch my steam pot, rice cooker, and slow cooker.”

While we may not use all of the Cosori’s cooking options, it’s nice to know that they are there. In fact, in the future it may lead us to being more adventurous in our food preparation, without having to spend more money on additional kitchen gadgets.

The 8 function option is also available on the 8 quart model, while the 2.1 quart model boasts 7 cooking functions.

Cosori states that its pressure cookers allow for adjustable cooking temperatures between 104 and 320 degrees Fahrenheit.

It’s difficult though to compare Cosori’s temperature range with the likes of Instant Pot. Due to the use of modes and preselected cooking options, multi-functional pressure cooker temperature ranges remain rather nebulous.

Cosori doesn’t specify whether its 320 degree maximum applies only to manual adjustment or if its saute mode can achieve higher temperatures.

Although they may not be a household name yet, Cosori products are built well and look nice.

Two tops are included: the pressure top and a glass top.

As the unit is operated under heavy pressure, the silicone ring lining the pot will eventually need to be replaced. Unlike most other pressure cooker companies, Cosori includes a spare silicone ring.

We’ve already talked about Cosori pressure cookers’ multi-functionality. How about some of their other features?

One feature that has been consistently praised by us and other reviews is Cosori’s quick pressure release button.

Before opening your pressure cooker and being hit with a wave of steam, simply push the quick pressure release button to expel that built up pressure and steam.

Cosori’s pressure release sits at the top of the market – saving you a few seconds while cooking.

Pressure cookers are all about modes and presets.

Press a button and you’re good to go.

In addition to having 8 uses, Cosori pressure cookers have a host of preset cooking modes, such as:

Delay times vary as to each Cosori pressure cooker model.

The personal size 2.1 quart model actually has the longest delay timer; allowing you to set a timer to start cooking up to 24 hours later.

Cosori’s flagship 6 quart model allows for up to a 12 hour delay.

As we mentioned earlier, the Cosori lineup of pressure cookers allows you to manually control the temperature.

If you’re one for following a recipe to the T, this is a great feature to have.

Most pressure cookers do not give you the ability to adjust the temperature and leave you to simply pushing a button for a preset.

Tend to make the same dishes on a weekly basis? Found the perfect settings to make those dishes?

Cosori lets you save your settings for easy use next time.

The control panel is sleek and intuitive and, in our opinion, has more of a professional appearance than Instant Pot’s, which can seem slightly cartoonish.

For buyers that haven’t yet used a pressure cooker, the control panel and LED display are super easy to use and don’t require any reading of the user’s manual.

We haven’t had any problems with our Cosori products but Cosori claims to provide lifetime 24/7 support, if needed.

For extended protection, Cosori’s pressure cookers are also protected by a 1 year warranty (with the option to opt in to an additional year).

REAL REVIEWS FROM OUR READERS

We asked members of our mailing list for their own personal experiences with the Cosori pressure cookers:

“I bought the 8 in 1 cooker last week and so far have only made chicken fajitas. I have a bad habit of not taking out my chicken to thaw and with the pressure cooker it doesn’t matter! Took frozen chicken out of the fridge and had chicken fajitas ready in 15 minutes.”

“My boyfriend and I moved in together this summer. Neither of us cook so we needed some quick cooking options (takeout gets expensive!). The 2.1 qt. pressure cooker by Cosori is super handy and the perfect size for two people. Meats, veggies, and rice are easy to make. My only complaint would be that the included cookbook is meant for a larger cooker size.”

With 4 different models, Cosori has rolled out some of the best pressure cookers for the money.

While each model brings its own something special to the table, the entire Cosori lineup features high-quality materials, sleek, intuitive interfaces, and versatility throughout.

For the money, our pick is the Cosori 6 quart 8-in-1 pressure cooker.

With an affordable price tag, the CP-016-PC not only provides eight different cooking modes, but also is large enough to comfortably feed the entire family.

Cosori might be an up and coming kitchen appliance brand, but their pressure cookers have already sold tens of thousands of units online.

For the money, Cosori’s pressure cookers stack up to any competitor – including Instant Pot.

We hope that our Cosori pressure cooker review has helped you to make a buying decision, or at least introduced you to Cosori as an option.

If you have any questions, or would like us to include your review in this article, please e-mail us at [email protected].

Welcome to HomeGenerosity, a home how-to and product review blog.  As an Amazon Associate I earn from qualifying purchases. See our privacy policy for more details.

Outdoor Security Lights: A Guide to Increase the Safety of Your Home

Modern Patio Furniture Materials Guide – How to Choose the Best

Basement Heater Solutions That Kill the Chill – 5 Options to Consider

Picking Up the Best Cold Press Juicer: The Ultimate Guide

Join Us For Ideas & Savings!

HomeGenerosity.com is a participant in the Amazon Services LLC Associates Program, an affiliate advertising program designed to provide a means for sites to earn advertising fees by advertising and linking to amazon.com. HomeGenerosity is paid a small fee by Amazon at no cost to you.

“There’s nothing half so pleasant as coming home again.”